What is Cardinality in Monitoring?

Time series anomaly detection is a complicated problem with plenty of practical methods. It’s easy to find yourself getting lost in all of the topics it encompasses. Learning them is certainly an issue, but implementing them is often more complicated. A key element of anomaly detection is forecasting - taking what you know about a time series, either based on a model or its history, and making decisions about values that arrive later.

If you work with monitoring or monitoring tools much, you’ve probably seen the phrase “correlating” here and there. For example, monitoring vendors often say you can use their product to correlate metrics. Issue 157 in the popular Prometheus monitoring system’s GitHub repository is to add support to correlate multiple metrics in the same graph.

I’ve noticed that when monitoring-related discussions mention correlation, the meaning is usually pretty vague. It often seems to refer to just graphing multiple things on a single chart with the same timescale.

Why Percentiles Don’t Work the Way you Think

We plan to add such a feature to VividCortex (more on that later). But a lot of the time, when customers make this request, they actually have something very specific, and different, in mind. They’re not asking for the 99th percentile of a metric, they’re asking for a metric of 99th percentile. This is very common in systems like Graphite, and it doesn’t achieve what people sometimes think it does. This blog post explains how percentiles might trick you, the degree of the mistake or problem (it depends), and what you can do if percentile metrics aren't right for you. 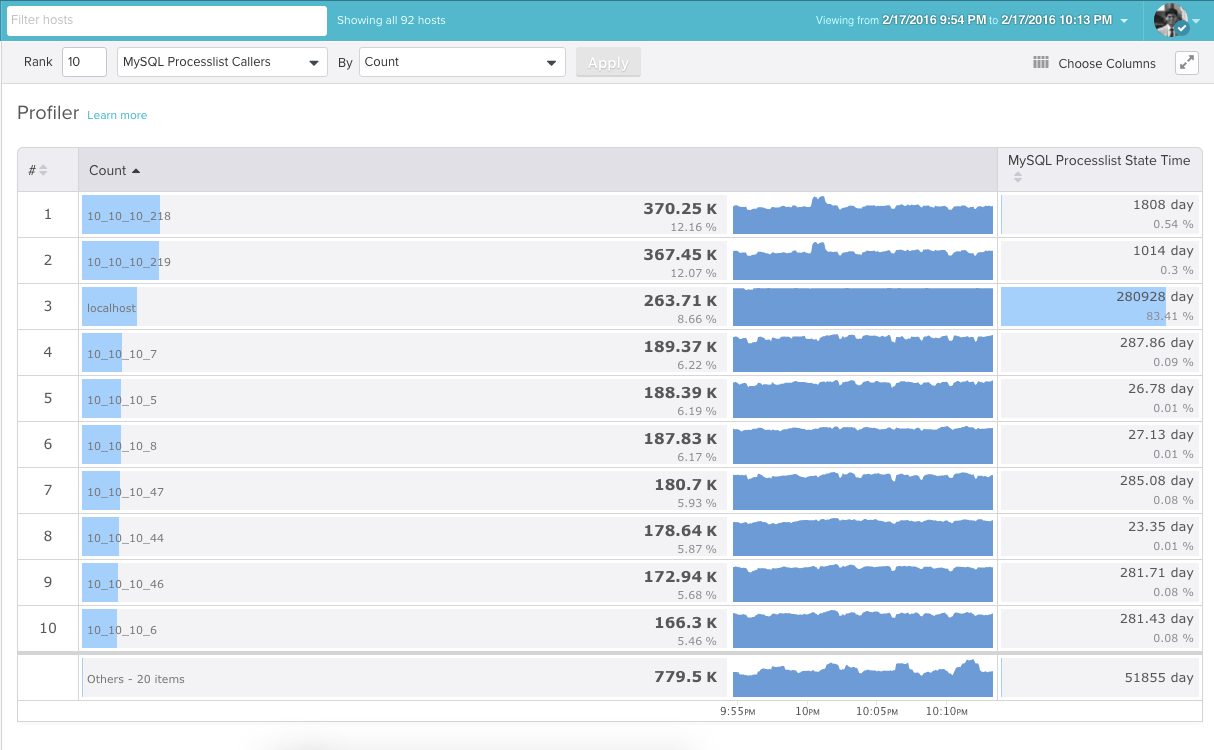 For the past few years I've been writing and speaking about time-series storage, a problem inspired by what I help build at VividCortex and also my personal projects. I've been thinking about a related problem for much longer, but I haven't had to work on it until now: ranking.

The Factors That Impact Availability, Visualized

We all want our systems to have high availability, but sometimes the exact meaning of “high availability” is not very clearly defined. However, availability -- like scalability, performance, and so on -- can be expressed as a mathematical function; it can be viewed in quantifiable and digestible terms. In this post, I’ll explain which parameters truly influence availability: an extremely useful concept to understand, as it enables you to focus your efforts in the right places and to actually achieve higher availability instead of just spinning wheels.

A Trendline is a Model

This post is part of an ongoing series on the best practices for effective and insightful database monitoring. Much of what's covered in these posts is unintuitive, yet vital to understand. Previous posts have covered Why Percentiles Don't Work the Way You Think; how to avoid getting to a point When It's Too Late to Monitor; how to tell If a Query Is Bad; and Why You Should Almost Never Alert on Thresholds.

Excel makes it easy to add a “trendline” to a chart, but does the trendline actually reflect the processes that produced the data? Usually not. Usually a trendline is just chartjunk and you shouldn’t use it.

Anomaly detection sure is a hot topic. We’ve written about it ourselves a number of times, and Preetam Jinka and I just coauthored a book for O’Reilly called Anomaly Detection For Monitoring. One of the challenges, as we’ve discussed so often, is that catch-all, generic anomaly detection is hard to do.

We’ve released a new version of our popular ebook on queueing theory, which clarifies and expands the first version. Thanks so much for all the feedback on the first one–it made this second edition that much better.

A Queueing Rule of Thumb

You’re probably familiar with the famous “hockey stick” chart, which shows how the response time for a system grows as it gets busier.

Read More
All posts Next